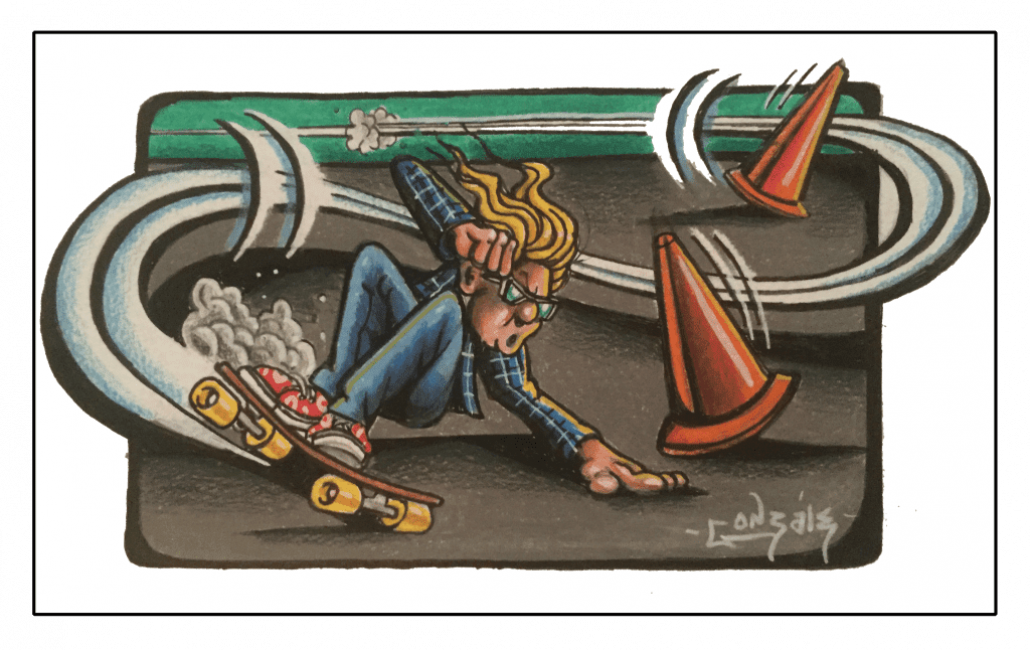 The next few years flower power was everywhere and so were drugs.  It was all around and soon I was smoking pot.  I hated the establishment and getting stoned was a way to rebel.  Art, music, surfing and cool cars were all connected to this cool new world.  The pictures of sports teams were gone from my walls and my room looked like Tom’s.  Big Daddy Roth and Mad Magazine were my new art mentors, and I was begging my parents for a surfboard, skateboard or guitar. Coming from a low-income family of eight, I’d never had an allowance, never even been in a restaurant so the guitar and surfboard were out of the question, but I got my skateboard!  When it arrived it was like a golden chariot into rebel-riding freedom!

When we moved down south, and surfing and skating became my life. My friends and I were kook surfers spending our days learning to surf.  I was a kook, but I was happy.  If I wasn’t surfing, I was skateboarding, pretending that I was surfing.   I started making my own skateboards in Jr. High wood shop class, we would experiment making different custom skateboards and me being the artist of the bunch, I’d draw crazy graphics on the bottom, simulating my hero Big Daddy Roth’s monsters and sell them. Between skateboard and bong sales, wood shop was treating me pretty good.

I showed some of my boards featuring my graphics on the bottom to a local surf shop and they loved them. Next thing I know I’m making my boards for them!  One day in wood shop I put a kick in the nose to make it look more like a surfboard. My teacher gave me a mold of a water ski and it worked. I showed my new custom board to a couple of guys, they laughed but one guy turned it around and started riding it back­wards and liked it. He could use the kick for his back foot to do 360’s. I thought he was nuts but they bought my boards anyway. 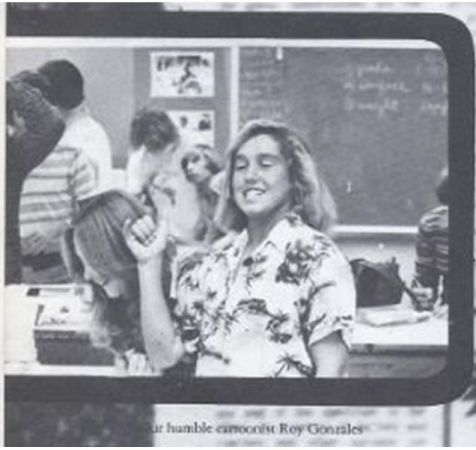 The shop I was making boards for, Oak Street, was the coolest shop in Laguna with riders like Mike Armstrong and Doug “The Roach” Brown, these guys had already made their bones surfing Pipeline, so they were living legends to me.  We were riding the clay wheels back in those days and when you hit a rock or crack you would stop on a dime and be pitches pitched onto the unforgiving concrete. I remember the day a new invention arrived that would revolutionize skateboarding – urethane wheels, soft and forgiving.  Rumor had it these wheels would glide over rocks, grip the pavement and not slide out.  Oak Street had gotten the exclusive sales rights, so the initial shipments would be coming to us first.

I was on the boat for that virgin voyage into history.  The package arrived, and out of it came the transparent, golden, polyurethane, magic cylinders with the sun hitting the wheels in shining splendor, it was like the finding the holy grail.  The older guys were frantically opening the boxes and assembling the boards for a trial run. I was dying to be part of the ritual, and as they were heading out the door one of the old locals (who had always been cool to me) handed me one of the boards said, “C’mon, little bro–let’s go!”  The other guys scowled, saying, “what are you doing giving him a board, these are the only ones we have!”  He told them, “Roy rips!” so I got the green light.   “Just don’t blow it.” one guy said, giving me a mean look.  I didn’t care, I was so excited about getting to skate with the best skaters on this, the first test ride of the “Cadillac of Wheels.”

Two kicks and we were off flying down the sidewalk.  I emulated the older guys’ moves, the low center of gravity, weighting and unweighting in and out of turns.  The wheels were everything we had ever dreamed of.  Weaving around the pedestrians, we hooted and hollered.  I was going faster than I ever had before when things took a turn for the worse.  A lady came out of the market with her dog on a leash directly in front of us, the older guy in front of me just tube tucked under her like butter, so I did the same.  I tried to duck under the leash as if it were the lip of a breaking wave.  I didn’t make it, the leash clotheslined me, wrapping around my neck; groceries went flying, the dog was barking, and everything happened in slow motion.  I watched in horror as the skateboard shot out from under me right into traffic.

Two cars missed it, and I jumped up running after it – I would have given my life for that piece of wood.  A car went flying by, almost hitting me, and ran directly over my skateboard!  Wheels, bearings and splintered wood flew into the air scattering over the street.  I was frozen in shock, then my trance was broken by the gang of older guys who had come back to see the ruckus I had caused. They all called me a kook and told me to split, except my friend, but he was powerless to help. Man, I had never felt so low in my life, I walked home with tears in my eyes, feeling like I had a giant K for kook branded on my forehead.  I never went back to that shop again.

I was no longer the big guy at my little Jr. High making skateboards in woodshop; I was now thrown into a high school where I barely knew anyone.  I was a super small guy who didn’t fit in, so my goal was to somehow get to the beach, or if not, I wanted to ride the new concrete streets they were being created around us daily.  I bought a set of those new magic wheels for myself and started skating with the other kids my age.  We were part of the new crew in South Orange County, vertical-skating, pool-riding rebels.  We would search out any concrete hole, drainage ditch or pool to ride…if it had a concrete vertical bank, we were on it. 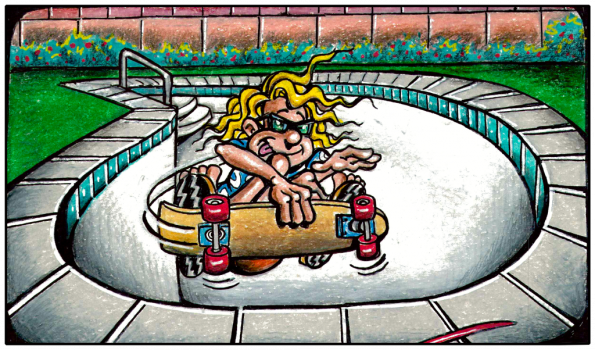 The main thing about surfing and skating was that we were free from the organized sports we had all grown up with, Little League baseball, Pop Warner football.  There were no longer coaches or referees with whistles. We were doing everything on our own. No rules, no boundaries. Your trail was yours to carve from waves to concrete. You had your own vision and everyone trail blazed it their own way.  We were juvenile trailblazers not even knowing what we were doing but we were having a blast doing it!  It was definitely not for the money ‘cause there wasn’t any. It was the love and stoke of the free ride!  All that would soon change. 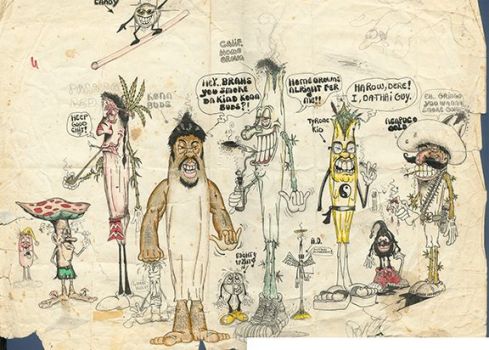 One day we hit the jackpot when we noticed that the roof of one of the giant mega stores in town was a skater’s paradise of hips and banks.  We cased the place and saw the workers leaving at four o’clock. By four thirty we were on that roof and had our own skatepark long before anyone had yet to build one.  We all swore ourselves to secrecy, but word got out fast and in a week’s time every skater on the coast somehow found out about it and were arriving from all over.  That’s when we met our match.  The older guys who showed up (from Skitch Hitchcock to Mike Weed) were beyond ahead of us, then here come the S.D. boys followed by the Dogtown crew. I was the A team member on my squad but when these guys showed up, they gave me a D- on my best day.

Since we were the locals, we taxed them for pot and booze and turned that rooftop into a daily skate party like no one had ever seen.  One day the cops brought us back to reality and came down on the scene twenty cars deep as if we were bank robbers.  I knew my escape routes like the back of my hand and got away.   So many kids were caught with bongs, beer and pot that someone ratted me out as the ringleader.

They picked me up blocks away as I skated home.  I denied everything but the cops took me home and started yelling at me in front of my parents saying what a bad kid I was and that I was headed for juvenile hall.  I was in trouble lot in those days and I was already on probation so if they checked my name I would end up in juvenile hall.  Surfing and Skating were keeping me out of trouble and now the cops were calling it a crime.  My dad grew up in a rough neighborhood and thought this was joke; he showed them the door and slammed it behind them.  They hadn’t even got my name; my dad asked me what happened.  I told him everything and he just said, “Cops! They don’t have anything better to do!’   What a cool dad – he had saved my ass!

After that I took a seat back, the skaters I witnessed blew me out of the park but they didn’t blow me out of the water!  We had skated banks and drained pools. I would blow over the light and grind the coping two out of three times but that third time started taking its toll. Waking up in the deep end of the pool, or in the polio pond with a big egg on the back of my head.  Unlike many others, I never broke anything, but I’m pretty sure I have permanent brain damage, given how many times I got knocked out. I decided then that I would hang up my skateboard and retire at the ripe old age of 15. I was a surfer, and scabs and saltwater didn’t mix…. water wipeouts were much more forgiving.

Now the only thing keeping me away from the ocean and surfing was school.  I hated school!  When I was there, I spent my time drawing surf and skate cartoons.  I was the class clown and couldn’t relate to or respect any of my teachers.  At that age you think you know everything, and it takes years to realize you don’t know shit! I did figure out that surfing all day, then drawing all night, then getting paid in the morning was a cool deal. Life was good…no, in my little world, life was GREAT!